I've been immersed in my work lately. No time to spend on my poor neglected blog. No time to tend the garden. Not much exercise. But I am enjoying my new job - it's amazing compared to the last one! I feel like I have a bit of control, a bit of respect, and a bit of joy in my work now. Teaching is hard work, I never doubted that, but so far it seems to be right up my alley. :)

Last weekend hubby and I traveled to a design conference in another (bigger) city. It was cool to get out of town for a few days and just be somewhere completely different. It has given me the creative kick I needed to start making art again.

While we were there, I also bought a few books (I LOOOOOVE books!), and so far this one has really captured my attention: 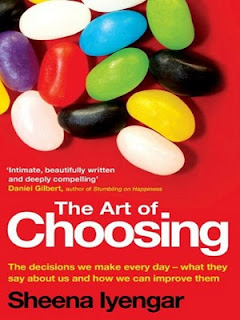 The Art of Choosing is written by Sheena Iyengar, a blind Sikh psychologist who has spent her career studying how people make decisions. It's a fascinating read and I highly recommend it. BTW, I choose this book because it had jellybeans on the cover, and because I had a cat called Sheena when I still lived with the parents. hehe :P

So how is everything else going? Well, surprisingly well, as the title of this post suggests. I've only had one serious cry/wail about our situation since my last blog post, so I will take that as a sign that I am coping quite nicely. On the otherhand, I am slighlty concerned that I'm not more upset now. I worry I might be bottling stuff up and just not dealing with it. I still notice babies and baby-related-stuff everywhere. At the cafe at lunch today I was fine, then a grand-dad came in with an infant in a car-capsule, and I noticed there was a "breast is best" pro-breastfeeding sign on the window. Just can't escape it. It's annoying me, but it's not driving me totally insane. I will take that small blessing! :P

One of my colleagues got an email yesterday which tested my "cover" strongly. (By cover, I mean that I've not told anyone at my new job what we've just gone through in regards to infertility and being disqualified for public IVF funding.) She has a friend in the UK who had been complaining for months about feeling tired and lethargic. It was getting worse. She had been to her doctor several times and nothing was helping. They couldn't figure out what was wrong. Then she mentioned the swollen ankles. Doctor decided to do a pregnancy test.... (she was on the pill) ...and lo and behold, it's a BFP! Want to know the amazing part? She's 7 months! WTF? How in holy hell could you not notice that! My colleague went to great pains to explain that her preggers-friend was a university-trained intellectual, not just some dumb-ass. But 7 months!? I asked the first question you ask when you hear a story like this: is she, ah.... is she a large lady? No. Slim. Where could she hide it? I dunno.... so now I know of a true case of this happening. Really happening. Only seen it in trashy womens mags and on telly before. But it happens in the real world. So that made for an interesting few minutes where I had to sit and try and compose myself, right before a class too! Sigh.

I can't remember if I told you before, but my one ray of hope was an organisation called Fertility NZ. I emailed them frantically, hoping that they could help somehow. Or at least explain what had happened. The wonderful ladies there have called me twice over the past couple of weeks with words to the effect that:


So I wrote a letter for FertilityNZ to pass to the fertility clinic: 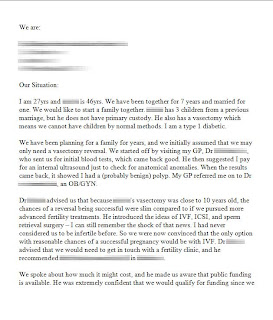 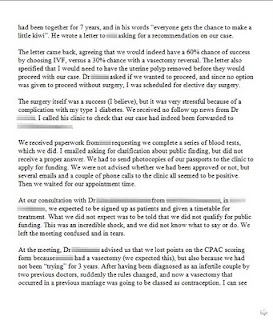 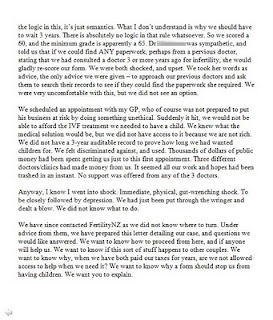 Currently, we are still waiting for a response from the fertility clinic. I hope they realise that this sort of treatment is unacceptable. I hope they find some common decency to re-score our case in a fair and decent way. I hope we are given a chance.
The lady from FertilityNZ did make me realise that we are not at a total loss... under the current law we WILL qualify for funding in Sept 2012 - still a while away, but possible. It feels like forever to wait and I really don't want to. But it's the only thing I can do at the moment. At least I'm not too close to 40yrs to wait (funding is also immediately cut once the woman turns 40). So that is another small blessing.
She also told me that they are actually trying to get the law changed in New Zealand, because it is so unfair to so many couples. She described how many folks get caught in the "time trap" - waiting, waiting, waiting until they qualify for funding. :(
So now you know why the blog's gone a bit quiet. There is nothing much interesting to report. Which has meant I've been rather calm. All this activity and planning, appointments and scans, tests and pills. It's all just stopped. I can now go back and do some gardening. Make some art. Focus on my design projects. It feels a bit like my brain is on holiday from the most grueling job in the world. I'm sad that it all didn't go as planned. But I'm so tired, and I don't see many options to push any further. I'm not giving up, but I'm having a rest. :)

I'm a type 1 diabetic woman living in New Zealand. I'm recording my experiences in deciding to have a baby with my husband, and our journey through doctor's visits, procedures, vasectomy reversal, sperm retrieval, ivf, icsi, and (hopefully) pregnancy and birth. Comments and feedback most welcome.